The pancreas is an abdominal organ involved in digestion and insulin production. Pancreatitis is defined as inflammation of the pancreas. The main types of pancreatitis include:

Many people experience a single episode of pancreatitis which can vary in severity but may require hospitalization. Recurrent attacks however can lead to long term scarring and pancreatic insufficiency. This happens when the pancreas is so damaged from chronic inflammation that it no longer produces insulin or the digestive enzymes necessary to digest our food. 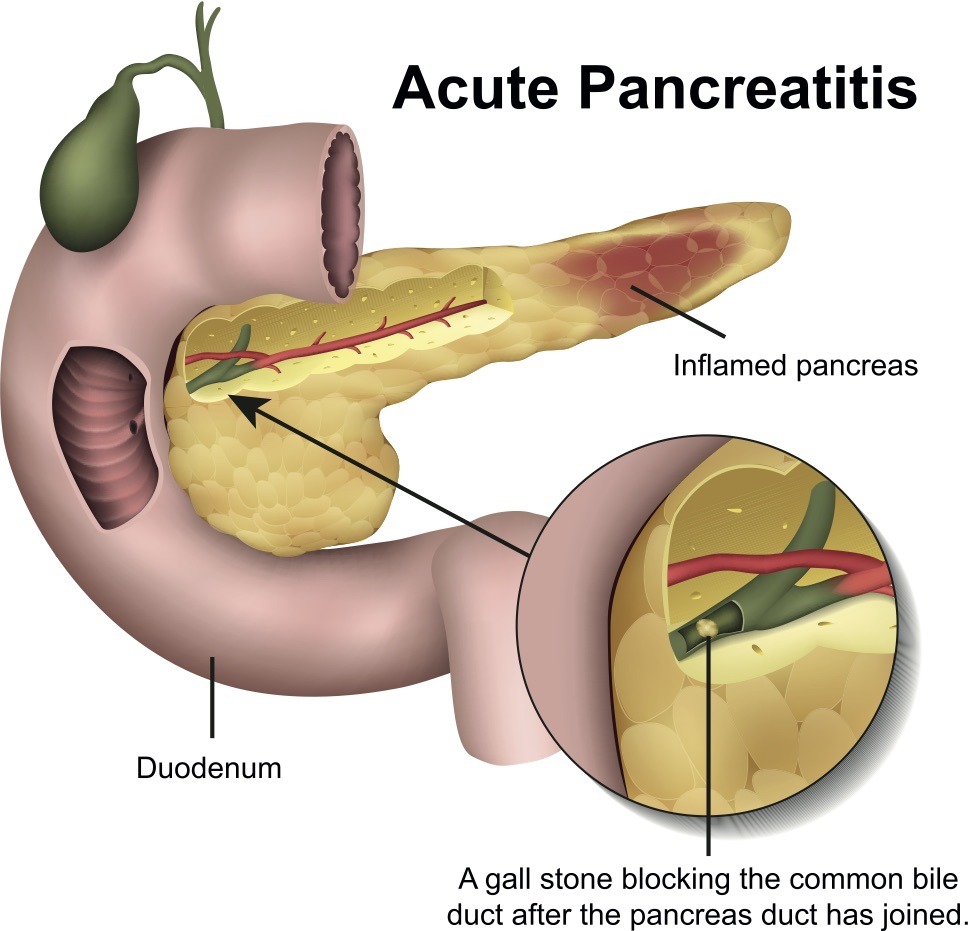 (i) gallstones pancreatitis: a gallstone from the gallbladder migrates into the common bile duct. If the stone is big enough and settles in the wrong place, it can obstruct the main pancreatic duct. This causes a backup of pancreatic enzymes in the pancreas causing irritation, inflammation and damage to the pancreas.

(ii) alcohol-induced pancreatitis: the toxicity of alcohol damages the cells of the pancreas bringing them on a pathway of inflammation and ‘ auto-digestion ’. Alcohol can cause both ‘acute’ episodes of pancreatitis, as well as ‘chronic’ pancreatitis. The latter is generally caused by high levels of drinking over a long period of time is characterized by scarring and poor function.

What are the symptoms of pancreatitis?

The most common symptoms of acute pancreatitis include:
(i) Pain – while this can vary in intensity it is often moderate to severe. Classically, the pain will start in the upper-mid abdomen and radiate to the back. Usually the pain is severe enough to require hospitalization.
(ii) Nausea +/- vomiting

How do you diagnose pancreatitis?

The diagnosis of acute pancreatitis is typically made in the Emergency Department (ED). It involves a clinical assessment by the doctor, blood testing, and diagnostic imaging (ultrasound and/or CT scan).
The diagnosis of acute pancreatitis requires 2 out of 3 of the following criteria (Atlanta criteria):
– abdominal pain suggestive of pancreatitis
– an elevated pancreatic enzyme level
– radiological imaging showing an inflamed pancreas.

A search for the underlying cause is also conducted. This will help guide treatment and help prevent recurrence.

Chronic pancreatitis/pancreatic insufficiency is typically assessed in clinic. Bloodwork and diagnostic imaging will be done. The 3 main objectives in the clinic are:
1) Find and treat the underlying cause of pancreatitis (if it has not already been identified)
2) Assess for complications of pancreatitis. The main complication that occurs is the formation of pancreatic cysts. These cysts can obstruct pancreatic drainage channels and put a significant amount of pressure on the stomach causing pain and nausea.
3) Test pancreatic function: The best test is the 72hour faecal fat test. In this test, a set amount of fat is ingested over a 3 day period. Stool tests are taken and the average amount of fat remaining in the stool is calculated. If there is more than 7g of fat per 100g of stool, the diagnosis of pancreatic insufficiency is made. In severe cases, the insulin producing capacity of the pancreas may also be impaired, therefore all patients are also screened for new onset diabetes.

How is pancreatitis treated?

The underlying cause of pancreatitis will also be treated:

Diligent follow is essential to monitor for complications related to acute pancreatitis.

For chronic pancreatitis there are several key aspects to management:

Finally, if you are a smoker, and you have chronic pancreatitis, it is recommended that you stop smoking.  There is considerable evidence that smoking prolongs inflammation of the pancreas and is a key factor in development of pancreatic cancer.