What is Coeliac disease?

Coeliac disease is an autoimmune condition in which the body reacts abnormally to a food protein called ‘gluten’. The body’s immune system wrongly identifies gluten as potentially dangerous and mounts an immune response which causes inflammation and damage to the lining of the small bowel.

Approximately 1% of the Australian population is affected with coeliac disease. 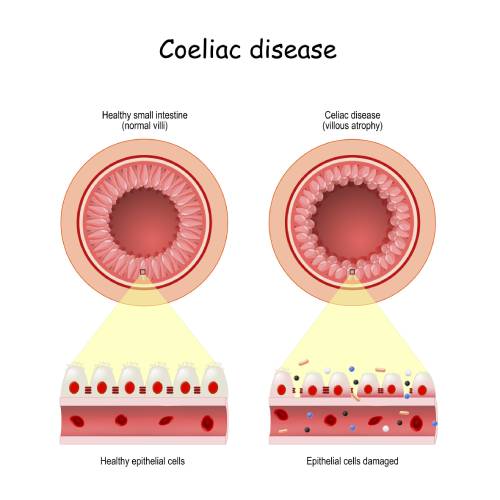 Coeliac disease is an autoimmune disease that is influenced by our genetics and environment.

In addition to genetics, environmental factors such as diet and exposure to certain infections are thought to play a role. A Swedish study, for example, demonstrated that if an infant is introduced to higher amounts of gluten in the first 12 months of life, they were more likely to develop coeliac disease (3).

Unfortunately, the incidence of coeliac disease appears to be increasing worldwide (2).

What are the symptoms and complications of Coeliac disease?

Only about 50% of people with Coeliac disease have these classic symptoms and indeed some patients have no symptoms at all. Additional but less common symptoms include:
– nausea / vomiting
– weight loss
– constipation
– belching / flatulence
– fatigue / weakness
– headaches and difficulty concentrating: ‘ brain fog ‘
A classic skin rash called dermatitis herpetiformis is seen in about 10% of coeliac patients. It is usually under the elbows and is very itchy. Joint pain and muscle cramps can also occur.

Complications of coeliac disease include:
– vitamin and mineral deficiencies – these include iron, calcium, vitamin B12, folate, vitamin D and zinc
– osteoporosis (linked to calcium deficiency)
– weight loss
– lymphoma of the small bowel
– infertility in both men and women (4)
– poor growth in children and delayed puberty in teenagers (5)

How do you diagnose Coeliac disease?

The diagnosis of coeliac disease requires 2 things:
1- A positive blood test for coeliac antibodies
2- A biopsy of the small bowel showing coeliac type damage to the small bowel

For both of these tests to be accurate, you need to be on a gluten-containing diet at the time of testing. Otherwise, there is a risk of a false negative result.

The most common and reliable blood antibody test is tissue Transglutaminase (tTG) (6). In special circumstances your doctor may order other blood tests which include ENA, Anti-gliadin, Anti-DAP, and HLA-DQ2/HLA-DQ8 testing.

The small bowel biopsy is obtained through a gastroscopy. This procedure is done by a Gastroenterologist which involves passing a tiny flexible camera through the mouth and down into the first part of the small bowel (duodenum). Tissue samples are taken with biopsy forceps (2mm tissue samples). The procedure takes 5 mins and you are given sedation to make you comfortable.

There is also a second blood test called a ‘gene’ test that identifies if you carry one of the susceptible genes (HLA-DQ2/DQ8). This test does not require a diet containing gluten to be consumed, and it is most helpful in ruling out coeliac disease especially if gluten has already been eliminated from the diet. A positive gene test only indicates that you carry the gene(s) and have a susceptibility for coeliac disease.

How do you treat Coeliac disease?

The treatment of coeliac disease is simple – do not eat gluten.  While this might sound easy, gluten is found in many foods and can be difficult to avoid.

Gluten is a plant protein found in wheat, barley, and rye.

The categorization of oats as containing gluten however is controversial. This partly relates to the contamination of oats with other gluten containing grains. The Australian Food Standards Code currently prohibits the use of a ‘gluten free’ claim on oat containing products. This contrasts with the situation in Europe, Canada, and the United States where oats that have been grown on ‘oat-only farms’ can be marketed as ‘gluten free’ (labelled ‘Pure Oats’).

Examples of Barley containing foods include malts, and beer.

Rye is the least prevalent, mostly found in rye bread.

It is difficult to comply to a gluten-free diet as gluten can be present in many foods that we are unaware of. For example, gluten is used as a binder in many things we use every day.  Gluten can be found in things like soya sauce, salad dressings, meat seasonings, potato chips, candy bars, luncheon meats, and soups. Interstingly and unexpectedly, gluten can also be found in toothpaste, lipsticks, vitamins/herbal supplements and even some prescription medications.

There are several important resources that can be helpful in adapting to a gluten free diet. The most valuable is an experienced dietitian who can help with education around reading food labels, learning to cook at home without gluten, eating-out strategies, recommended gluten substitutes and common pitfalls. The goal is to have a 100% gluten free diet. Another useful resource is the Coeliac Society of Australia. This organization provides lots of practical information, a regular newsletter and advocates for better awareness of coeliac disease.

Monitoring is important for people with coeliac disease. Yearly antibody testing is useful to assess for gluten exposure as this test should return to normal on a 100% gluten-free diet. Other blood tests monitoring for vitamin and mineral deficiencies is useful. A two yearly bone mineral density scan is also recommended.

Approximately 10% of the Australian population is gluten intolerant.  This means that gluten causes significant and sometimes severe symptoms, however small bowel biopsies are negative for coeliac disease.  The treatment of gluten intolerance is a diet with a reduced amount of gluten (to the level that symptoms no longer occur).  A strict gluten-free diet is not necessary in gluten-intolerance.